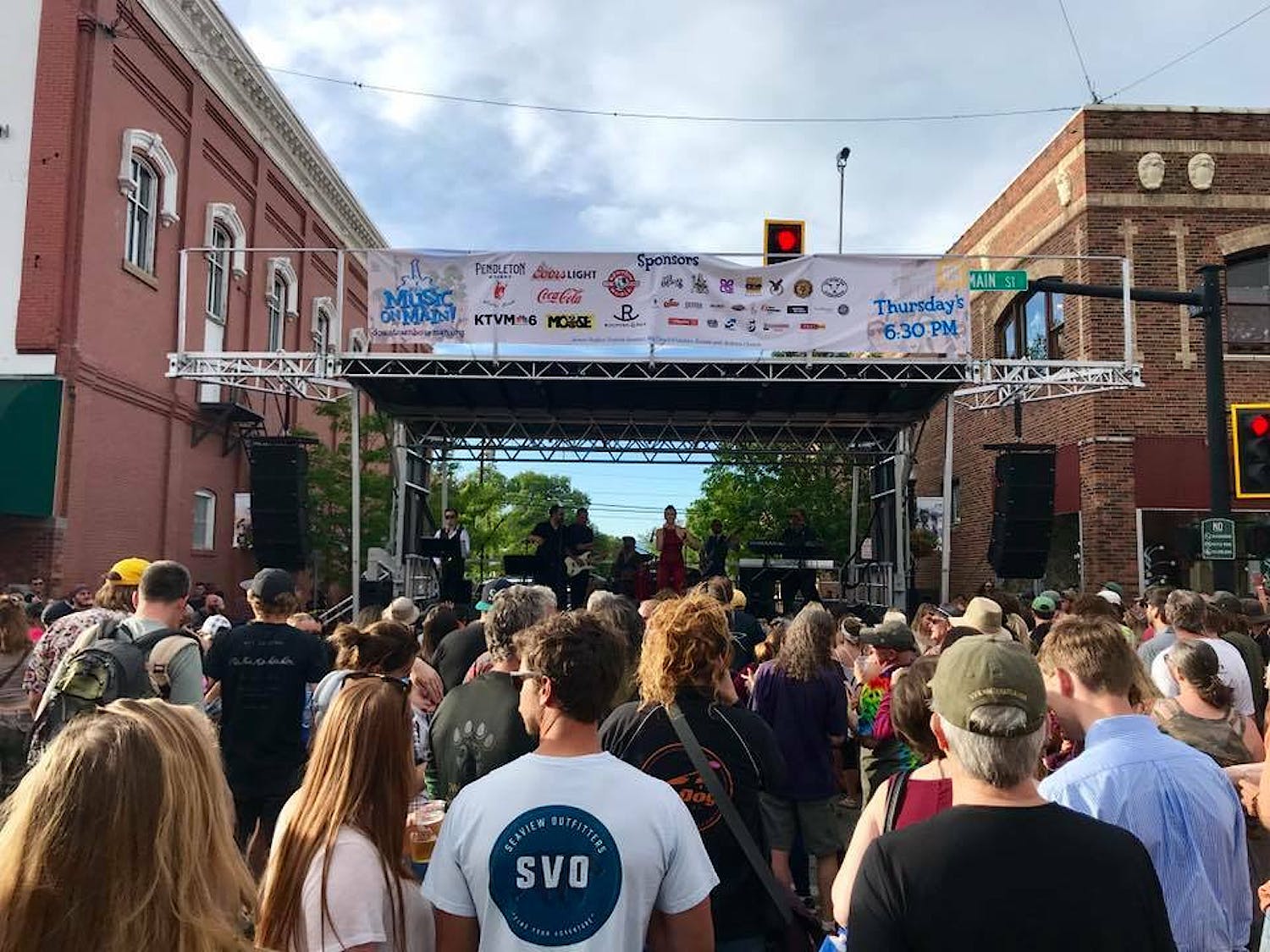 The Downtown Bozeman Association is proud to present the 21st Annual Music on Main summer concert series this summer in Historic Downtown Bozeman. Music on Main will be located on Main Street from Rouse Avenue to Black Ave. The fun will last from 6:30 PM till 8:30 PM on Thursday evenings from July 22 through August 12.

Bring the kids from 6:30 PM to 8 PM for kid’s activities hosted by local non-profits. Grab a bite to eat from one of our many rotating food vendors, step into a few of the downtown stores that stay open late and of course enjoy outstanding live music from popular local and nationally recognized bands. The music begins at 7:00 PM and lasts until 8:30pm.

We will work closely with the City of Bozeman and Gallatin County Health Department to ensure a safe and welcoming event for everyone attending. There will be some operational changes made to the event this year so, please be understanding and respectful to all attendees and staff if you attend this year’s concert series!

The Downtown Bozeman Association, the City of Bozeman and the Bozeman Police Department would also like to remind the public of the rules and regulations regarding the Open Container Waiver for the 2021 Music on Main summer concert series:

There are also NO glass or aluminum containers of alcohol, NO pets and NO coolers allowed in the event area.

Please note that we will work closely with the City of Bozeman and Gallatin County Health Department to ensure a safe and welcoming event for everyone attending. There will be some operational changes made to the event this year so, please be understanding and respectful to all attendees and staff if you attend this year’s concert series!

More than bluegrass, G-Phat has been wowing audiences with a wide array of musical genres. Grounded by top instrumental talents, the band weaves in the tight harmonies of father and sons: Shawn, Grayson, and Garrett Lane.

Paige And The Peoples Band have quickly made a name for themselves as being one of Montana’s Premiere Musical acts. While the Band themselves are a young group, only a few years old, members of the PPB have been charming, captivating and blowing the collective minds of audiences throughout the United States and Europe for many years.

This horn powered, fully charged Band were voted Bozeman’s Best Rock Band of 2019, 2020 and premiered Last season of 11th and Grant With Eric Funk on PBS. The Episode later went on to win an Emmy Award for best Audio. Paige & The Peoples Band deliver a performance to remember and definitely not to miss!

At just 17-years-old, Gabriella Valdes, better known as Vella, is already making waves on the internet and is positioning herself to be a household name. Vella recently went viral on social media and now boasts millions of followers on her social media accounts. Featuring a dynamic voice that can go from a roaring belt to a sweet and soothing falsetto in a matter of seconds, Vella naturally displays the kind of vocal control that is sought after by even the best of singers.

Brooklyn-based five-piece The RT's (formerly The Rad Trads) are known for their eclectic take on rock n’ roll, which mixes punk rock energy, horn drenched soul & precise musicianship with a lighthearted but sincere delivery. It’s a sound that has come sharply into focus on the band’s latest release, See You Again.

The Rad Trads have performed across four continents (including 10 European Tours), 18 countries and 44 states.